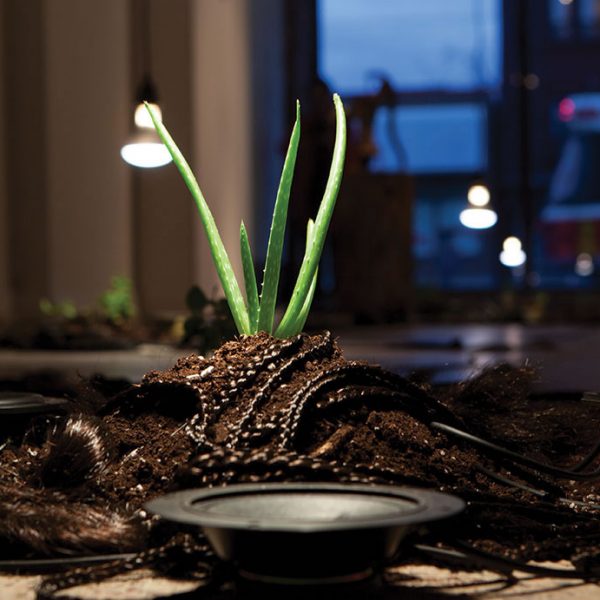 Mala Hierba is an immersive, interactive, sculptural sound installation that invites viewers to interact at multiple levels with the history of people, plants, culture and rituals of San Basilio de Palenque, Colombia. The sound in Weeds recreates a “tunnel of sounds” used in Lumbalú, a collective funeral ritual where the community performs chants, dance, and play games around a circle, along with musical expressions such as the Bullerengue Sentado, Son Palenquero or Son de Negro, and Rondas. The chants and sound for this Lumbalú were recorded at San Basilio de Palenque, in the funeral of Evaristo Márquez, a very well known actor who worked with Marlon Brando in Quemada.
Mala Hierba, formally explores the traditional hair braid designs and semioticly layered resistant knowledge of the Cimarronaje, as well as the use of medicinal plants to nourish and heal the body, the land, and the soul. In addition, visual and audio techniques are used to research the history and imprint of biopolitics.

This work seeks to evoke and re-narrate histories through poetry and metaphor, having plants as protagonists shaping human history.

I remember the dusty yellow streets filled with children playing; the sounds of the river and the pick-ups in unison blasting “champeta” music; elegant women walking proudly with intricate sculptural hairstyles. But what I remember the most were the walks along the river looking for the “Ollitas de Mono.” From the branches of the Lecythis tree we collected her fruits that look like wooden bowls that we would play with and make into little cooking pots. The other children and I would always go with this man, Avaro the Elder, who will would guide us while telling us stories of how escaped African women and men carried seeds of medicinal and edible plants in their hair to bring to San Basilio de Palenque (1). He would point out the plants and tell us their names and magical properties. Ten years later (1993) the sounds of Palenque come back to me and my first sound installation is born. I travel to the village to find the “Ollitas de Mono” with Avaro the Elder, this time opening the shores of the river, Aloito Pio.

In June 2013 , together with my mother, we began organizing a community radio station for San Basilio de Palenque, Aloito Pio. On arriving in Palenque, my childhood memories of the sounds and dusty streets, the walks in the forest looking for the “Ollitas de Mono”, remind me to ask for Avaro the Elder. I learn from his son, Enrique, that they just took him to the hospital. Three days later, we receive the news: the master Evaristo Marquez has passed away and there will be a Lumbalú ceremony. At this moment, I realize that the man from my childhood, who took me along the river, was the well known actor, appearing in “Quemada” with Marlon Brando. On June 13th, with the arrival of his body, began the nine nights of the Lumbalú, a sacred funerary ritual of travelling through a tunnel of sound to guide the spirit from the world of the living to the dead. Avaro the Elder’s family invited me to film the Lumbalú, a ritual that had never been filmed before.

This work is a tribute to Evaristo Márquez, but also to the land that received the seeds that the escaped slaves brought from Africa to Cartagena, to Palenque. The migration of the healing “weeds” and the magical-religious beliefs were fundamental in transforming this land into a new place of freedom. Sown from seeds hidden in the patterns of their braids, mapping the way to the new territory of freedom; the map and seeds concealed within their hair. Seeds become “weeds” growing in the corners of the houses, in the cracks of the sidewalk, in the courtyards and river banks. “Weeds” that grow and spread in areas that have been removed, healing medicine for the land and the palenquero …

(1) San Basilio de Palenque has been the home to Afro-Colombians, the decedents of the country’s first slaves, founded in the 16th century by the escaped slave Benkos Bioho, out of the dozens of escaped slave communities in this region, only this Palenque was able to survive until the present day. Palenques language is called Palenquero a mixture of African Kikongo languages from Congo and Angola with Portuguese (which was spoken by the slave traders who brought the slaves to Cartagena) and Spanish. UNESCO has declared Palenque a Masterpiece of the Oral and Intangible Heritage of Humanity in part because of the African traditions that still survive here.